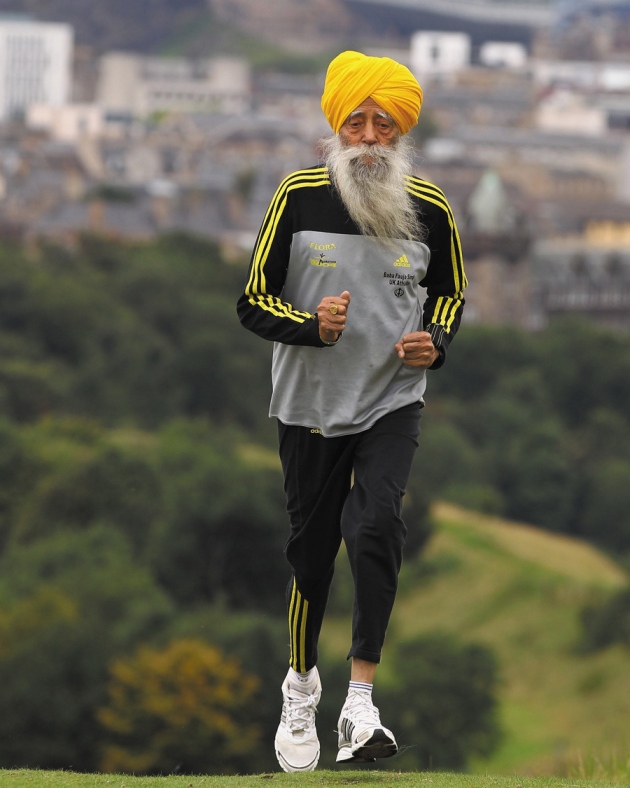 By 2050, the number of people over the age of 80 will triple globally. These demographics could come at great cost to individuals and economies. Two groups describe how research in animals and humans should be refocused to find ways to delay the onset of frailty. The problems of old age come as a package. More than 70% of people over 65 have two or more chronic conditions such as arthritis, diabetes, cancer, heart disease and stroke. Studies of diet, genes and drugs indicate that delaying one age-related disease probably staves off others. At least a dozen molecular pathways seem to set the pace of physiological ageing.

Researchers have tweaked these pathways to give rodents long and healthy lives. Restricting calorie intake in mice or introducing mutations in nutrient-sensing pathways can extend lifespans by as much as 50%. And these ‘Methuselah mice’ are more likely than controls to die without any apparent diseases. Post-mortems reveal that tumours, heart problems, neurodegeneration and metabolic disease are generally reduced or delayed in long-lived mice. In other words, extending lifespan also seems to increase ‘healthspan’, the time lived without chronic age-related conditions.

These insights have made hardly a dent in human medicine. Biomedicine takes on conditions one at a time — Alzheimer’s disease, say, or heart failure. Rather, it should learn to stall incremental cellular damage and changes that eventually yield several infirmities.

The current tools for extending healthy life — better diets and regular exercise — are effective. But there is room for improvement, especially in personalizing treatments. Molecular insights from animals should be tested in humans to identify interventions to delay ageing and associated conditions. Together, preclinical and clinical researchers must develop meaningful endpoints for human trials.

Longevity pathways identified in model organisms seem to be conserved in humans and can be manipulated in similar ways. Genetic surveys of centenarians implicate hormonal and metabolic systems. Long-term calorie restriction in humans induces drastic metabolic and molecular changes that resemble those of younger people, notably in inflammatory and nutrient-sensing pathways. Mice engineered to have reduced signalling in these pathways live longer; humans with similar mutations have lower rates of cancer and diabetes.

Several molecular pathways that increase longevity in animals are affected by approved and experimental drugs. Cancer and organ-rejection drugs such as rapamycin extend lifespan in mice and worms by muting the mTOR pathway, which regulates processes from protein synthesis to cell proliferation and survival. The sirtuin proteins, involved in a similar range of cellular processes, are activated by high concentrations of naturally occurring compounds (such as the resveratrol found in red wine) and extend lifespan in metabolically abnormal obese mice. A plethora of natural and synthetic molecules affect pathways that are shared by ageing, diabetes and metabolic syndrome.

Diet has similar effects. The drugs rapamycin and metformin mimic changes observed in animals fed calorie- and protein-restricted diets. And fasting triggers cellular responses that boost stress resistance, and reduce oxidative damage and inflammation. In rodents, fasting protects against diabetes, cancer, heart disease and neurodegeneration. There are many anti-ageing interventions that could be considered for clinical trials.

Ignored opportunities
Scientists are not set up to capitalize on these leads to combat the looming ageing crisis. Clinicians do not realize how much is understood about the molecular mechanisms of ageing and its broad effects on diseases. Laboratory researchers are naive about clinical implications of side effects or overdoses. Researchers of all stripes focus too much on easing or reversing the progression of diseases. Gerontologists should work with people who are middle-aged or even younger. The problem is calcified by the funding gap. Budgets for ageing research are small compared to disease-centred research. The Division of Aging Biology in the US National Institute on Aging receives less than 1% of the National Institutes of Health’s budget even though it supports research into the mechanisms underlying most disabilities and chronic diseases. Most grants focus on diseases of specific systems (such as Alzheimer’s). Most study sections are not set up to evaluate multidisciplinary research on healthspan. The situation is similar in Europe and Japan.

How should we test interventions that extend healthspan? Human data from dietary restriction and genetic-association studies of healthy ageing could help to channel the most promising pathways identified in preclinical studies. Animal studies should be designed to better mimic human ageing (see ‘Track function in ageing animals’). For example, frailty indices are often used in human studies. Comparable indices should be developed for mice.

Suitable endpoints for human trials are needed. Animal work suggests many candidates as potential biomarkers, such as accumulation of molecular damage to DNA, proteins and lipids from oxidative stress. Publicly funded clinical trials — such as one studying potential benefits of aspirin to prevent heart attacks and general decline in the elderly — could also collect crucial samples of blood, muscle and fat for molecular analysis.

Funding agencies should establish committees of translational scientists to review which markers of biological ageing are most consistent between animals and humans, and prioritize the most practical for further assessment. Chosen biomarkers could be evaluated in clinical studies over a broad age range of patients already being treated with drugs that increase lifespan in animal models. Assessments must also be developed for dietary or other interventions that do not involve drugs.

The most important change must be in mindset. Economic incentives in both biomedical research and health care reward treating diseases more than promoting health. The launch of a few anti-ageing biotech companies such as Calico, created last year by Google, is promising. But public money must be invested in extending healthy lifespan by slowing ageing. Otherwise we will founder in a demographic crisis of increased disability and escalating health-care costs.

Much is known about how humans age. Over the past decades, gerontologists and geriatricians have developed batteries of tests to assess declines in physiological function as people age. For example, the ability of insulin to clear glucose from blood tracks the risk of diabetes; stiffer arteries indicate a future of hypertension and cognitive impairments, and reduced bone density increases risk of fracture.

Rigorous studies have compared groups of young and older adults or followed the same individuals over time to establish many function-based markers of ageing. Indeed, life expectancy and the likelihood of disability for people over 65 years can be predicted from reductions in grip strength, average walking speed, or the ability to sit and rise from the floor.

These assessments provide ways to measure whether interventions involving drugs or lifestyle regimens protect the health of older adults. Regulatory authorities in the United States and the European Union are considering using a combination of these kinds of physical-performance tests to evaluate effectiveness in clinical trials of drugs for age-related disorders such as the muscle-wasting condition known as sarcopenia. At the same time, basic researchers have investigated molecular mechanisms of ageing in several animal models. Genetic and pharmacological manipulations can increase lifespan in worms, flies and rodents. There is some evidence that these manipulations might increase healthy lifespan as well. And centenarians and groups that practise strict healthy lifestyles (such as Seventh-day Adventists, many of whom follow a mostly vegetarian diet) frequently enjoy good health until near the end of life. The rate of ageing, it seems, is malleable, not fixed.

To determine how best to preserve function with ageing in humans, researchers must create common ground between animal studies and clinical assessments. Several functions known to decline with age in humans can also be assessed in rodents. But many physiological tests that have been established in humans either do not exist or are not routinely performed on ageing animals. It is time to expand functional assessments in model organisms, especially rodents.

In 2004, the US National Institute on Aging launched a programme to test strategies that extend lifespan in mammals. Multiple facilities are funded to assess the same parameters in several mouse strains under standardized conditions. Unfortunately, most measurements occur only after the animals die.

Animals have evolved physiological redundancies, so manipulating a gene or signalling pathway does not necessarily change the function of an organ or organism. A drug that slows ageing should slow declines in several organ systems, but few laboratories can measure this in animals. One that does is the Healthspan Assessment Laboratory at the Mayo Clinic in Rochester, Minnesota. The lab quantifies muscle strength and cognitive impairment, and can measure body composition, metabolic rate, insulin sensitivity, motor coordination, bone density and exercise capacity. The Buck Institute for Research on Aging in Novato, California, (where S.M. works) has established similar resources. More facilities like this are needed.

Adapting tools
Researchers need new methods to characterize function, particularly to track the same animals as they age, and before and after interventions. They need imaging tools and minimally invasive techniques, and those already established should be included in more experiments. Highest priority should be given to the assessment of motor and cognitive functions most likely to be recognized by drug regulators and industry. And, as in human studies, function should be characterized in several organs and tissues. Variability among animals, which increases with ageing, must also be accounted for.

Even studies that do assess function in animals often do so under conditions with little relevance to human ageing. Experiments on whether a drug improves cardiac function typically use young mice whose hearts have been purposely injured, rather than old mice with naturally aged hearts. To study the effects of obesity on the diseases of ageing, mice are fed a diet of up to 70% fat, with high proportions of trans and saturated fats; such diets bear little resemblance to typical human diets. Effects of inflammation are induced by molecules such as lipopolysaccharide at concentrations that would never be observed in normal physiology. Damage from oxidative stress, which accumulates over the years in humans, is rapidly induced with toxic chemicals such as paraquat.

Translational studies must be different. They should measure parameters such as blood pressure, metabolic rate, cardiac output and kidney filtration at animals’ normal resting states and in response to common physiological challenges, such as running on an exercise wheel or completing a maze.

In the past decade, the US National Institutes of Health (NIH) has released a set of testing batteries for clinical research. These measures, including tests for balance, memory, strength and perception, can be used across many kinds of studies and are designed to make it easier to combine results from different trials.

Longitudinal studies in humans, such as the NIH-supported Dynamics of Health, Aging, and Body Composition (Health ABC) Study, have collected body scans, health inventories, and physical performance data (such as walking speed) to establish clinically relevant measures of bone density, blood pressure and motor function. These kinds of assessments, adapted for rodents, should be used to determine which of hundreds of pharmacological compounds and nutritional interventions that are shown to slow the effects of ageing in model organisms should be advanced to trials in humans.

Investigators studying ageing in model organisms and humans must collaborate more. At the NIH, for example, basic and clinical research that relates to the biology of ageing are administered in separate programmes. To translate animal work into human treatments, the ageing-research community must rethink how all those involved communicate and interact, and are trained and funded.

The need for such crosstalk in ageing research has been stated frequently, with little effect. The development of standardized functional assessments that extend from model organisms to human populations may finally make it happen.